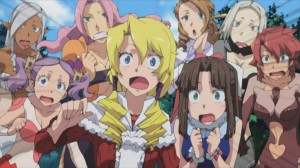 Isekai no Seikishi Monogatari was originally named Seikishi Monogatari, which was the Japanese working title for the series.  In the U.S., the fan-translated name of Saint Knights Tale was then used since it is easier to remember. When FUNimation licensed the anime in 2012, they renamed it to Tenchi Muyo! War on Geminar. The series was announced  in January 2001 by Kajishima-sensei in an interview.  While Kajishima-sensei apparently wrote the story back then, in October 2005, Kajishima-sensei provided some information as published in the doujinshi  Kajishima Onsen 5.12:

As future plans go, there are presently a number of projects in motion, but right now (the month of October 2005) there’s hardly anything concrete I can talk about yet. I’m currently working on the “Seikishi Monogatari (working title)” that I’ve mentioned before. Since I developed Seikishi around the same time as Dual!, I felt that it’s a bit past its “expiration date” after sitting on the shelf for a long time, so I’m renovating the story and the designs. Anyway, since it was originally planned to follow the same pattern as Dual! on a different stage, you can let your imagination take you from there.

Who or what exactly is Rea?

Rea is one of three artificial humans created on Geminar by the Senshi Civilization in order to defeat Gaia, a powerful Seikishin.

Who are the other two artificial humans?

How did Rea arrive on Earth?

One night on Geminar, Rea was messing with an experimental teleportation device and found herself on Earth. From Rea’s perspective, this was purely accidental. (Tenchi Ban 13.8)

How did Rea become attached to the Masaki family?

After her arrival on Earth, she was found by MASAKI Kiyone, Tenchi’s mother and Nobuyuki’s husband. She was then later adopted into the Masaki family. (Tenchi Ban 13.8) It is unclear exactly where she lived after being adopted.  Kiyone let Rea in on the secret of the Masaki family (their connection to the vast space empire controlled by Jurai and the advanced technology). When “Kiyone-oneesama” died, Rea took it upon herself to help Nobuyuki raise Tenchi.

Did Rea try to return home to Geminar?

Apparently not. For whatever reason, she came up with the plan to bear a child to send back to aid the war effort on Geminar once her body had reached adulthood. Plus, she had no means of returning to Geminar until she learned about the advanced technology that the Masaki family had access to, from which a dimensional transporting device could easily be custom made. (Tenchi Ban 13.8)

So when Kenshi was born, she just decided he’d be the one to return in her place?

Apparently so. It sounds rather harsh, and she did worry about it to a degree. However, once Tenchi’s harem learned about it, they all got on board to help with the plan to send Kenshi over to Geminar once he was old enough. After all, Kenshi is only part human. He’s also half artificial being and part Juraian too. That makes him pretty special and unique.

No one objected to sending a boy over to Geminar to fight in a war?

YAMADA Seina (GXP) apparently thought that it was too much to train Kenshi to take on this task and said as much, but he too got on board with the idea that Kenshi being the one to return was destiny. (Tenchi Ban 13.8)

Did Tenchi and the others train Kenshi to be the “monster” he was in War on Geminar?

Yep.  Here is a breakdown of who did what as far as Kenshi’s training went.

Kenshi was also taught on how to deal with the unexpected by spending time with Sena and Mihoshi, both of whom tend to have unlucky or unexpected things happen to them. (Tenchi Ban 13.8)

Since Kenshi used a single Light Hawk Wing, does this mean that Kenshi’s powers are like Tenchi’s powers?

Short answer: no. From the Omatsuri Zenjitsu no Yoru Seikishi Ban 10.8 doujinshi:

When Kenshi in the end defeated Gaia with a Light Hawk Wing, it was generated by way of him controlling the focus of Tenchi-ken’s enormous light energy, it was not something Kenshi himself generated from scratch. If he were to try to generate a Light Hawk Wing again, he would likewise have to start from producing compressed matter that holds an enormous amount of energy.