As Tenchi Muyo! Ryo-ohki fans know, Comiket is where series creator KAJISHIMA Masaki releases his doujinshi in which he gives little tidbits of news to the fans of the canon part of the Tenchi Muyo! franchise. As I had previously mentioned, for Comiket 85, Kajishima-sensei released two doujinshi.

The first doujinshi is entitled Tenchi Muyo! -If-, and is an all-color, mostly wordless work showing events with Tenchi and his harem in the future (focusing on the daughters of Ryoko and Aeka), as well as focusing on Seina’s son with Kiriko. 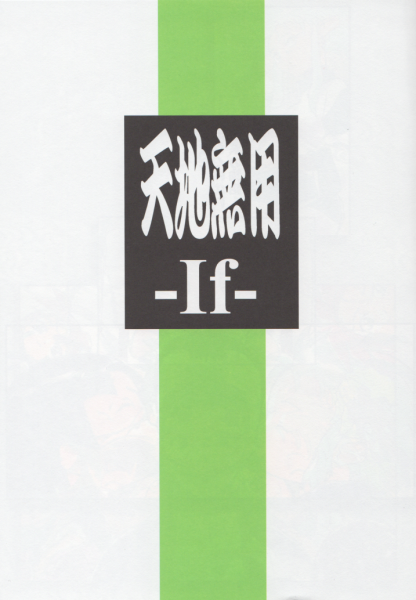 Those wishing to see this doujinshi may do so here.

The second doujinshi is entitled Omatsu Zenjitsu no Yoru – Tenchi Ban 13.12.  This one is a prequel to the Tenchi Muyo! War on Geminar anime, whereby Kajishima-sensei gives us a look at the events leading up to the first episode of the anime.

Those wishing to view this doujinshi may do so here.

This is the doujinshi where Kajishima-sensei gives fans the news, and here’s the exciting news he has for us today, courtesy of Crazed from Tenchi Forum. (For those who might not be aware, Isekai no Seikishi Monogatari is the Japanese name for War on Geminar.)

It’s been hectic this past summer and winter, but I’m finally commencing negotiations on the new anime. I did not explain this portion of the story in the anime because it would be far too long, and the feeling of tension would be lost. I wanted to make it easy to come into for those that had no knowledge of Tenchi. I think I will return to “Isekai no Seikishi Monogatari” and treat it the same as Tenchi. The plan is to continue to add on to “Isekai no Seikishi Monogatari’s” story in a written form, it’s so fun to draw.

Now then, I am going to talk about the upcoming projects. Now even though this is talking about what is being made, let me share with you in the most unprofessional way, a heart to heart. At the winter Comiket “Tenchi Muyo If” was released. The book was released in the style of a story board; however, the explanation for its content was not included. Because the doujin is tied to an anime project I didn’t want to reveal much. The contents of Tenchi Muyo “If” will be the future installment. When you pitch a new Tenchi project, it’s a good idea to try and entice them with pictures. I’ve been trying to avoid images that would be considered finalized. As was the case with the original, working in collaboration with others can be difficult. I think that in the future it will be easier to create more finalized images if future books are released in this format. Additionally, the tenth “Tenchi Muyo GXP” novel is complete. The anime project is still incomplete, but maybe it will be complete by summer…..

Wow! I know many TM!R fans have continuously asked me about the possibilities of an OVA 4 series being made.  My response has pretty much been that I didn’t think one would be made, but one can never tell. I guess a sequel to Tenchi Muyo! Ryo-ohki is in the works, at least in terms of pitching this to AIC/VAP executives, and possibly further.

I’d really love for the sequel TM!R anime to be a full TV series, or at least a higher budget title, along the lines of how War on Geminar was done.  I chuckle at Kajishima-sensei’s admission that working with others on Tenchi anime is difficult for him. I’ve long said he is a prima donna, in that he knows what story he wants to tell. However, when others are involved (Hayashi-san and Hasegawa-sensei in OVA 1; “Nabeshin” in GXP), they often want to put their own stamp on things for whatever reason, thus conflict can arise. ^_^;

Folks tell me work is underway to have Tenchi Ban 13.12‘s story translated. If that comes through, I look forward to reading about Kenshi’s life prior to his being sent to Geminar. I’m a little disappointed that Kajishima-sensei’s plans for the series are not rooted in a sequel anime series, but in written form (possibly novels or doujinshi).

For those interested in the latest Tenchi Muyo! GXP 10 novel, here’s a scan of the cover.

It goes on sale on Monday (20-JAN-2014) in Japan. (A belated thanks to Useless Tenchi for alerting me to this.)

Pretty exciting stuff to be sure.